Modern wine culture began in Ancient Greece. In this cartoon you will see how the social side of wine developed: a shift from wine as a ritualistic drink or administered by the high society, to a drink made and consumed in every social class. This is what ancient Greeks did for us: brought wine in everyone‘s table.

This chapter begins with a Socrates‘ quote:

Wine moistens and tempers the spirit and lulls the cares of the mind to rest. It revives our joys and is oil to the dying flame of life.

In other words: wine to relax, to feel better, to make us happy and make life easier. This quote means that wine had uses for the common people, beyond the religious purposes that were the main use of wine in earlier (and contemporary) civilizations. You can go back and check the previous videos about history of wine to check this fact.

The point is how this transition happened: while in earlier societies, the rulers and/or the priests controlled vineyards and winemaking, in the Greek society wine was a business and therefore controlled by a commercial-based society. How was it that this commercial society had such importance in Ancient Greece?

Around 1200 BCE the people from northern Greece invaded the southern Mycenaean Civilization, a monarchy and aristocracy-ruled society and, in terms of social order, similar to the Sumerians or the Egyptians. After the wars between the northern Greeks and the southern Mycenaeans, the land was devastated and the common people ran from ruin and misery to the invader-occupied fortresses for protection. For 2 centuries, the invaders tried to consolidate their power by giving more privileges to these common people at the cost of the former kings and aristocracy who tried to dispute their rights. It was around these fortresses that the new Greek society emerged: democratic city-states with vigorous commerce and mercantile class.

That is how vine-growing and wine consumption expanded to a whole new group of people who could own vineyards, produce and drink their own wine. Wine became a common crop and eventually a business. There are many references to the usual consumption of wine by the ancient Greeks: the word “symposium” defined their favorite occasion to drink wine: conversation after meals. Also, poems like The Odyssey in which Ulysses found his father taking care of his vineyard, described as having 50 different furrows for each type of vine, when he returned from his adventures. There were vine-growing guides and even medical prescriptions from Hippocrates who prescribed different wines depending on the disease.

The religious purpose of wine remained: Dionysus was a god from the east that, in the Greek pantheon, became god of wine. His festivals were considered an excuse to open the fermented casks in spring, drink and get drunk… Alexander the Great banned them for this reason, though they continued underground until the Middle Ages.

Changes in slavery laws allowed free Greeks more spare time with which to improve their commercial efforts. By the 8th century BCE the Greeks had expanded their way of life, including vine-growing and winemaking, to almost every port in the Mediterranean basin. 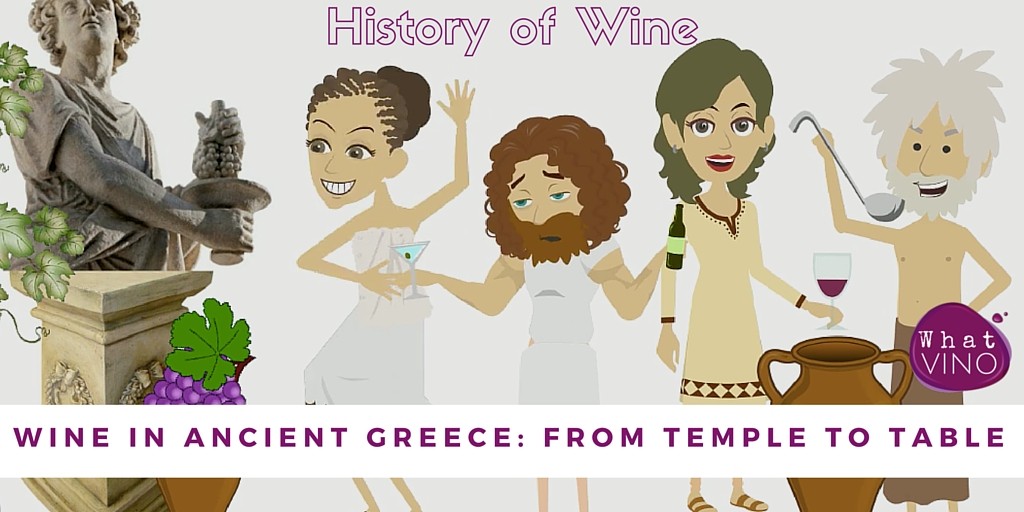